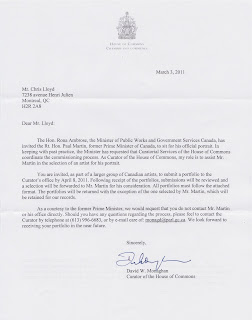 I have maintained a professional contemporary art practice since 1999 that has included in large part a single major ongoing project: Since 2001 I have been engaged in a one-sided correspondence project with the Prime Minister of Canada. The letters I write (all email, almost daily) are casual and diary-like and blend my opinions of political issues with personal, everyday activities. The subjects touch on relationships, work, finances, contemporary art and parenthood. Writing is an intimate, personal activity, yet I believe the personal is political, and attempt to share my views with the Prime Minister in an honest, straightforward manner.

Alongside the letter-writing aspect of this project I have also made portraits of the Prime Minister, based on images appearing on the front pages of the national newspapers. These are in fact portraits of the mediated image, and a snapshot of the news of the day, more-so than that of a real live person. These images have been made in a variety of media: oils, acrylics, and coloured pencils on wood.

Having the opportunity to paint the official portrait of a Prime Minister who was a large part of my correspondence project (2004 - 2005) intertwines two distinct aspects of the art world. Most official portraits of dignitaries, politicians, sports heroes or CEOs are made by professional portrait painters, most of whom make it their careers to paint portraits. Before the age of television, newspapers and photography this was one of few options for any artist, and many great works of art began as court paintings of kings or queens.

Today the art world, like the world it mirrors, is fractured, plural, and global. Artists need not rely on commissions to create art; international art movements such as Fluxus, Minimalism and Conceptual Art have prioritized the idea over the subject/object in art. Even though I subscribe more to these aforementioned movements, I actually possess the necessary draughtsmanship and colour theory skills to produce high quality portraits.

If I am selected to paint Mr. Martin's portrait, it would represent a significant intersection of these two art realities. This is one of the strongest reasons I think I would make the ideal candidate to paint Mr. Martin's portrait: it would overlap two parallel art worlds. I have had a fair bit of critical and commercial success as an artist based solely on the fact that the Prime Minister never responded personally to my hundreds of letters. For a former PM to select me as his portrait painter is to open a real dialogue between that of an artist and a politician.